Allegiances
Teams are aligned under the Corporate or Insurgent umbrellas.

Corporate (RajCorp, Corporate Affiliates, Black Lotus Syndicate)
The Corporate forces are less numerous, but well supplied with the latest hardware. The Corporate  Battle.net begins the event with the Reboot Supportware Program in place.

Insurgent (The Resistance, Rebels of Cydonia, Red Mars)
The Insurgent forces rely primarily on numbers and small unit tactics. The Insurgent Battle.net begins the event with the Teampro Supportware program in place.

Undeclared (Mercenaries, Wildcards)
These teams may have access to either network, depending on which side they happen to be fighting for at the start of each game! 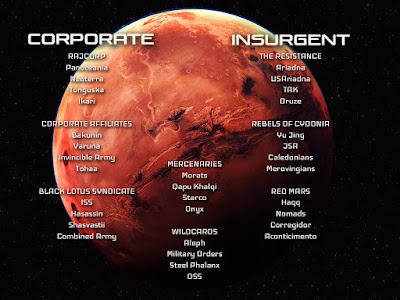 Teams
Teams are made up of 4 players with thematically aligned armies and will be assigned by the TO. Although there are 4 players per team and there are 4 armies for each listed above, Teams will not be made up of exactly one player from each army. This is just the pool of armies that each Team can be assembled from out the gate. There could be 3 Panoceania players and 1 Neoterra player on the RajCorp team for example.

This chart is a guide assuming even army representation. As Registrations come in, the TO will shift players as necessary. For example, if RajCorp is full and another Pano player signs up, the TO might have him join the Corporate Affiliates if there is a spot. Or, if there are enough Pano/Neoterra/Tunguska/Ikari players, the TO may form a second RajCorp team.

The Teams should be seen as individual combat units in the Corporate and Insurgent armies. The real fight is Corporate vs Insurgent, not Team vs Team. The Undeclareds are there to keep things interesting!

Teams or specific factions may have specific requirements as outlined below. Each Team has its own Classified Objective. These Classifieds will not necessarily be identical to the Classified Objective deck card, but will give you an idea on what Specialists to take. For example, Experimental Drug may refer to a specific Drug with specific effects each Game.

The Resistance is primarily composed of descendents of the original Americano and Roscosmo settlers of Ivanov Crater. Located in the rugged Terra Sirenum region of Mars, the colony was never really integrated into the larger network of Yu Jing colonies that came afterward. Due to this isolation, Ivanov never really lost the frontier spirit of early colonial days. The Resistance movement was largely unorganized until the recent arrival of Advocate and her Druze. Her Druze contingents provide valuable leadership, equipment and training to The Resistance.

The Resistance's secondary objective at Ivanov Crater is to record, document, and publicize the actions of RajCorp and their associates. Advocate believes this is the best long term strategy to chip away at RajCorp's immense resources.

Requirements/benefits: Warcors will be able to complete the Telemetry classified objective. Druze may take a 12 XP spec-op model.

The Cydonians are the most infamous underground faction advocating for a free and independent Mars. Its ranks are made up of third or fourth generation colonists who resent domination by the Hyperpowers (Yu Jing in particular.) They see RajCorp as an embodiment of these overlords.


The Cydonians know the battle for Ivanov is one small set piece in their struggle under the colonial yoke. Their secondary objective is to gather as much intel and data as they can to bolster their own position after the crisis.

Red Mars is an extreme ecoterrorist group opposed to the terraforming of Mars. Nominally aligned with other anti-establishment groups, their primary goal is to destroy the structures and institutions that support terraforming. Many Red Mars members, however, see general industry, progress and development as contributing factors as well.

Red Mars' objective is not complicated. They want to destroy as much of the Ivanov Industrial Complex as possible.

RajCorp rose to prominence during the first and second Nanotech wars. The conglomerate's fortunes are generally tied to Panoceania's military-industrial complex but they have many ties across the Human Sphere. Outside observers note the company's unusually lucky investments. The most recent example of which was buying out the Venusville Mining Cooperative mere weeks before the discovery of Teseum deposits in the Ivanov mines. (Geologists note the presence of Teseum on Mars should be impossible.) Despite this luck, the company has been at the center of some notorious incidents and maintains a standing contract with the Ikari Company.

Director Verhoeven is using the crisis as an opportunity to test out their more recent and unusual innovations in weapons technology.

Requirements/benefits: All RajCorp lists require at least 1 Heavy Infantry or TAG model. No Warcors may be taken. The Classified will be accomplished by models with a MULTI weapon. Ikari will be able to designate some additional models on top of this.

The R&D complex at Ivanov is run in cooperation with many like-minded affiliate Corporations, such as Ultor, Omni-Consumer Products, and Ursae Majoris. The facility even boasts a private starport for the ease and confidentiality of visitors, which is unusual. Economically, it is much more viable to enter the Martian gravity well via one of the orbital elevators.

The Affiliaties are pleased to use the crisis to test a suite of new bio-medical products.

Requirement/benefits: All Corporate Affiliate lists require at least 1 Heavy Infantry or TAG model. No Warcors may be taken. Tohaa are limited to a single combat group.

Corporate rivals have often claimed RajCorp has dealings with the more illicit elements of the Human Sphere. To date, nothing has ever been substantiated.

Requirement/benefits: No Warcors may be taken. Combined Army and Shasvastii are limited to a single combat group.

Venusville has always been a favorite port of call for the rough and ready sorts. Many dogs of war smelled trouble brewing before the crisis and have made themselves available to the highest bidder. Although RajCorp's coffers are deep, it has many enemies willing to shell out hard cash to obstruct them.

Reputation is king among the mercenary companies. Extreme brutality is seen as the quickest way to develop that reputation.

Requirements/benefits: Onyx is limited to a single combat group.

Will authorities intervene? Who is really pulling the strings at Ivanov?

Requirements/Benefits: At Registration, the TO will draw 2 Classifieds (from those not represented above). The player may choose 1 to use for the event. Each Wildcard player will likely have their own individual Classified.