In the Martian mines, miners frequently settled grudges the old way, with the mine elevators doubling as cages for their pit fights. Sixteen combatants honored this tradition Saturday night at Mission Critical.

Here are a few snaps of the final rounds. It came down to Matthew's Swiss Guard HMG (who unbelieve-ably defeated Neko Oyama, Saito Togan and Senior Massacre) to face Jon's Kiel-Saan (which went through a Jaguar, Nahab, and Hussein Al-Djabel). The final round was brief, with the Kiel-Saan quickly dispatching the Swiss Guard. Congrats Jon! Well fought Matt!

Here were the rules we used:
- Starting Wounds equal to Physique value
- Crits cause D20 damage (roll ARM or BTS against each point of damage separately)
- For each additional WND value over 1, count 1 critical as a normal hit instead
- No Lt, Tactical Sense, Impetuous orders, or Command tokens. (just tit for tat back and forth)
- Rerolls available for certain event achievements prior and each $5 ticket purchased for the Charity Raffle (could buy as you go!)

We did have some restrictions:
- No STR (no blood)
- No monofilament or Adhesive ammo (no sport)
- 10 point model minimum (no risk)

E/M was allowed which did shut down some HI.

Consequences:
A model that was killed could not be used in Sunday's games. A model with less than half wounds could voluntarily yield by leaving the elevator. (Which did happen at least once, as Jon's Kiel-Saan let Mark's Nahab flee once it became clear his +6 BTS Metachemistry roll would shut him down!) 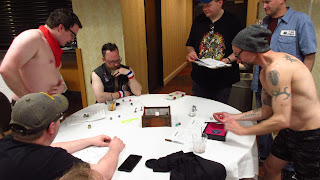 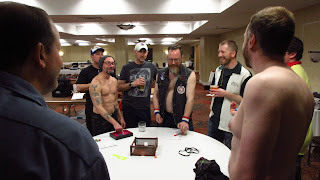 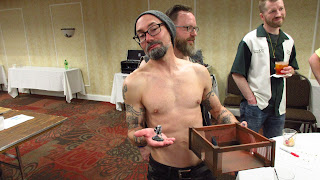